You can find more Stewart films that you can stream from Amazon Prime at This Link.  Note that some are free with a Prime membership and others have a rental fee.

Below is a trailer for Star Trek: Nemesis, which was Stewart’s final Star Trek movie.

Patrick Stewart is very active on Facebook and you can connect with Patrick and his fans on his Facebook page.

Stewart takes a look back at his personal and professional life in this interview:

Patrick Stewart has narrated several audio books including A Christmas Carol and The Chronicles of Narnia.  For a complete list of his available audiobook titles, visit: Patrick Stewart on Audible

More on Patrick Stewart (from Wikipedia)

Sir Patrick Stewart OBE (born 13 July 1940) is an English actor, director and producer whose work has included roles on stage, television and film, in a career spanning seven decades.

On 4 August 2018, CBS and Stewart jointly announced that he would be reprising his role as Jean-Luc Picard in a new Star Trek series. In a prepared statement, Stewart said he and the new show’s producers would “endeavour to bring a fresh, unexpected and pertinent story to life once more.

When Stewart was picked for the role of Captain Jean-Luc Picard in Star Trek: The Next Generation (1987–1994), the Los Angeles Times called him an “unknown British Shakespearean actor”. Still living out of his suitcase because of his skepticism that the show would succeed, Stewart was unprepared for the long schedule of television production that began at 4:45 am each day. He initially experienced difficulty fitting in with his less-disciplined castmates, saying that his “spirits used to sink” when required to memorize and recite technobabble.Stewart eventually came to better understand the cultural differences between the stage and television, and his favourite technical line became “space-time continuum“. He remained close friends with his fellow Star Trek actors and became their advocate with the producers when necessary. Marina Sirtis credited Stewart with “at least 50%, if not more” of the show’s success because others imitated his professionalism and dedication to acting. 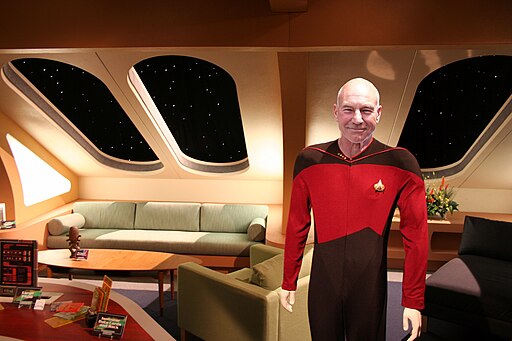 When asked in 2011 for the highlight of his career, he chose Star Trek: The Next Generation, because “it changed everything [for me].

Beginning his career with a long run with the Royal Shakespeare Company, Stewart received the 1979 Laurence Olivier Award for Best Actor in a Supporting Role for his performance in Antony and Cleopatra in the West End. Stewart’s first major screen roles were in BBC-broadcast television productions during the mid-late 1970s, including Hedda, and the I, Claudius miniseries.

From the 1980s onward, Stewart began working in American television and film, with prominent leading roles such as Captain Jean-Luc Picard in Star Trek: The Next Generation, its subsequent films, and 2020’s Star Trek: Picard; as Professor Charles Xavier in the X-Men series of superhero films; the lead of the Starz TV series Blunt Talk; and multiple voice roles.

In 1993, TV Guide named Stewart the Best Dramatic Television Actor of the 1980s.  In 2010, Stewart was knighted by Queen Elizabeth II for services to drama.

Stewart has been married since 2013 to Sunny OZell.

Stewart and his first wife, Sheila Falconer, divorced in 1990 after 24 years of marriage. They have two children, son Daniel and daughter Sophia. Daniel is a television actor, and has appeared alongside his father in the 1993 made-for-television film Death Train, and in the 1992 Star Trek: The Next Generation episode “The Inner Light“, playing his son.

In 1997, Stewart became engaged to Wendy Neuss, one of the producers of Star Trek: The Next Generation. They married on 25 August 2000, and divorced three years later.

Four months before his divorce from Neuss, Stewart played opposite actress Lisa Dillon in a production of The Master Builder, and the two were romantically involved until 2007.

In 2008, Stewart began dating Sunny Ozell, a singer and songwriter based in Brooklyn, New York, whom Stewart met while performing in Macbeth at the Brooklyn Academy of Music. Stewart purchased a home in Park Slope in August 2012, and subsequently began living there with Ozell. They married in September 2013 with Sir Ian McKellen performing the wedding ceremony.

Patrick Stewart’s net worth as of 2019 is about $70 million, according to Celebrity Net Worth.  His primary sources of wealth are:

Real Estate: In November 2019, Patrick spent $4.3 million on a 4,500 square-foot home in the Hancock Park neighborhood of Los Angeles. His previous Los Angeles home was a large estate shared with his second wife. Patrick and his ex sold this home in 2004 for $6.5 million. Patrick also owns an apartment in Park Slope, Brooklyn.

How Old is Patrick Stewart?

Patrick Stewart is 79 (born 13 July 1940) but is very fit and has the abs and biceps to prove it.  His secret to staying young: “pushups,” he told Entertainment Tonight.